“In October of 1994, three student filmmakers disappeared in the woods near Burkittsville…” 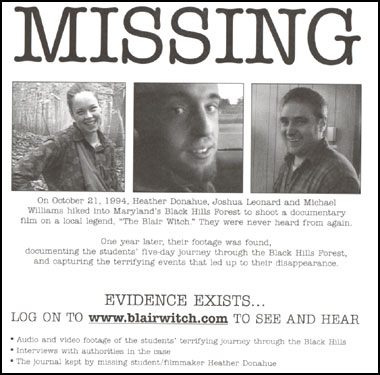 So you remember being afraid whilst watching the movie ‘The Blair Witch Project’? Well, you didn’t get scared whilst watching the movie. You initially got scared long before even stepping inside the cinema, and long before you first picked up the DVD or Video Cassette. Why? Because of clever “Guerrilla Marketing” that went viral before the release.

(This is probably one of the most unconventional marketing campaigns ever seen.)

The movie creators devised a strategy that would place the Blair Witch and the actors in a cleverly created urban legend. With its origins held firmly on the internet, the creators put themselves miles ahead of the public before even starting the campaign even in those early days of the web.

Their website – with its low-budget feel – would give information regarding the Blair Witch and backgrounds of the three students that went missing whilst pursuing the legend. Real photos, carefully selected movie footage, diary entries and police interviews all built up the buzz around the tale. It gave the tale credibility. And all without the help of social media channels your average marketer would rely on today to spread the word.

Missing person posters were also distributed throughout colleges in the US that added to this buzz and sense of realism. Cinema screenings sold out, and just about when the media got hold of the phenomenon the whole thing went viral. Probably the first of its kind to use the internet (combined with unorthodox traditional methods in this way) to have such an effect.

People thought they were going to watch real recovered footage of the students lost in the woods in the US state of Maryland. People simply had to see it, all because of the rumours that circulated in the collages of this fictitious legend. A legend that started on the internet, that eventually got talked about in every University, College and High School across the world.

Marketing costs for this production completely outweighed the actual budget of filming. The nature of the production obviously helped this being a low-quality documentary style feature using unknown actors. But The Blair Witch Project spectacularly made about £250million at box office. This is the power of the creative thinker when unconventional methods are available. And believe me, they are available.

We’ve seen similar efforts on more recent movies such as ‘Paranormal Activity’ and ‘The Fourth Kind’, but The Blair Witch Project stands out as the first to do so in 1998, with the most effect.

The thinking behind this marketing campaign still inspires the unconventional marketer today.

14 thoughts on “The Blair Witch Legend”

What do you think? Cancel reply